The Flow of Humanity

This article originally appeared on September 16, 2010 in The Island. Michele Ellson, editor.

Salma Arastu stands in the Regina K. Stafford meeting room in the main branch of the Alameda Free Library, surrounded by 23 of her paintings on the theme of “the flow of humanity.” She tells her audience, “Whatever you follow, we’re all following one God.” She refers to a piece in her slide show that includes a line from the Koran stating that God wants us to live together in compassion. 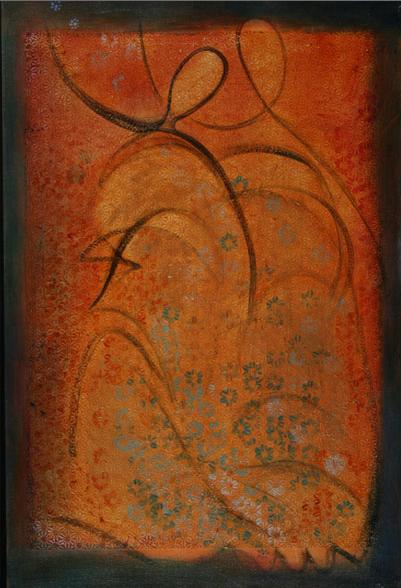 Arastu speaks of contending with multiple labels. She was born Hindu and converted to Islam when she married. She is physically “handicapped,” having been born without fingers on her left hand. And she is a woman. According to her website, this gives her a “unique opportunity to create harmony and world transformation through the expression of the Universal in her art.”

Arastu was born in India, and lived in Iran and Kuwait before coming to the United States in 1987. Recently she moved to Berkeley and says, “East Bay has been good for me. They respect diversity.”

Oil, gesso, and pen and ink on board or canvas, some paintings are inhabited by beings that resemble bipedal sharks, or figures represented primarily by looping lines inspired by Arabic calligraphy, and which connect them symbolically. Arastu says that what these beings are is a mystery even to her. This body of work spans from 1993 to 2008 and represents her transition from abstract to figurative painting. 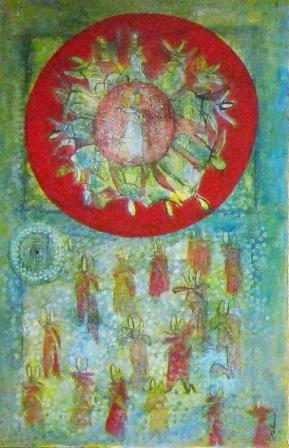 “I Found You All around Me”

One piece with these “lyrical lines,” as she calls them, is “I Found You All Around Me.” This painting depicts more than a dozen dancing couples, and tells the story of Krishna appearing in many incarnations to dance with each and every village maid. Each thinks he is dancing only with her, suggesting the possibility of a personal relationship with God. She said that having been born Hindu, she can’t deny the image of Lord Krishna in her work.

Arastu cites folk art among her influences, which is evident in the details embedded in “The Promise” and “The Tree and the Shadow.” She also credits the composition of miniature paintings. But although inspired by this ancient tradition, Arastu also embraces modern technology. Recent work not on display includes images manipulated in Photoshop to combine her paintings and photographs, a process she thoroughly enjoys.

“The Tree and the Shadow” (detail)

She also began sculpting in the past few years, wanting her paintings’ “happy dancers to be in reality.” With modern technology, she has only to draw these images, and the metal is cut by laser. One of her sculptures, an eight-foot-tall piece of public art, goes on display in San Diego later this month.

Her reception was held September 8, just days before the anniversary of the 9/11 terrorist attacks. She was greatly affected by that tragedy and felt, “as an artist, I had to contribute something.” She painted “The Tragedy Is Not Over Yet,” almost eight feet wide, twice the size of the work currently on display.

As a Jew, I was supposed to be at temple the evening of the reception celebrating Rosh Hashanah, the Jewish New Year. But listening to this Muslim artist speak about her response to 9/11 and “the universal spirit that unites humanity,” I felt like I could not have spent the evening in a more spiritual way.